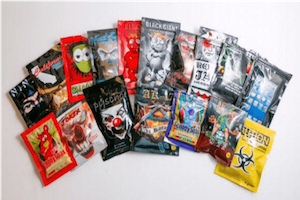 Often Called “Fake Weed”, Synthetic Cannabinoids consists of dried up and shredded plant material that has been sprayed with chemicals similar in composition to Marijuana. They Unlike marijuana, however, Synthetic Cannabinoids can often possess lethal effects. Despite the fact that some users describe effects similar to Marijuana (Happiness, relaxation, elevated awareness, and detachment from reality), “Fake Weed” can have detrimental health and psychotic affects. These include tremendous anxiety, confusion, paranoia, hallucinations, rapid heart rate, violent behavior, vomiting, and suicidal thoughts. Designer Synthetic Cannabinoids generally come in colored foil packets with cartoon-like graphic designs and names like “Black Mamba” and “Spice” to make them seem less harmful than they really are.

Some widespread Synthetic Cannabinoids include “K2”, “Spice”, “Code Black”, “Geeked Up”, and “Cloud 9”. Nevertheless, abuse of these unregulated substances has gained traction in recent years and hundreds of brands now exist. While Synthetic Cannabinoid manufacturers market their products as safe alternatives to marijuana, they are not. In fact, though many products are marketed as “incense” that is not meant to be consumed in any way, they are often vaporized and inhaled to mimic the effects of Marijuana–– all to the detriment of the user's health. Even more than this, however, many Synthetic Cannabinoids manufacturers falsely claim that their products contain only “natural plant material”, conveniently leaving out that they are nearly always coated in some unregulated chemical mixture.

On a molecular level, these psychoactive substances bind to the same brain receptors that THC –the main molecular element in Cannabis– does. But unlike THC, the chemicals in Synthetic Cannabinoids can produce much more unpredictable effects. This is not only due to the fact that the chemical amounts vary batch-to-batch in these substances, but also because the chemical mixtures that coat the substance's plant material are themselves, unregulated. Therefore, much differently than Cannabis, Synthetic Cannabinoids can be extremely addictive. So much so that frequent users have reported headaches, anxiety, depression, and irritability when attempting to discontinue use. Altogether, malicious marketing and unregulated ingredients make these drugs extremely potent and even more dangerous. So much so that in just two-weeks, over 300 people overdosed on tainted, unregulated synthetic marijuana in Washington DC (6). 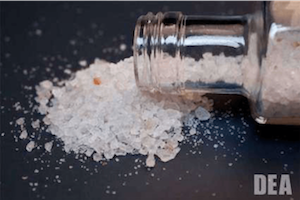 Bath Salts are drugs that seek to mimic the effects of illicit substances like Methamphetamine, Cocaine, and MDMA. With absolutely no relation to Epsom salts used during bathing, this synthetic substance often takes the form of a white, pink, or brown crystal-like-powder (4). The scientific name for this substance is Cathinones, although some street names include “Bliss”, “Cloud Nine”, “Lunar Wave”, “Vanilla Sky”, “Jewelry Cleaner”, and “Plant Food” (4). Not unlike Cocaine and Ecstasy, the effects of Synthetic Cathinones can include extreme paranoia, hallucinations, amplified sex drive, and violent behavior. There are various health risks associated with Bath Salts: these include increased heart rate, blood pressure, and chest pain as well as dehydration, breakdown of skeletal tissue, and kidney failure. Bath salts can be consumed via smoking, snorting, or by lethal injection. Usually, the latter is tied to the worst health outcomes and sometimes, death.

What Does the Law say About Synthetic Stimulants?

According to the CA Health and Safety Code, every person who:

Is guilty of a Misdemeanor public offense (1)

What are the Penalties?

Penalties for Sale of Synthetic Stimulants (1)

Penalties for Use or Possession of Synthetic Stimulants (1)

Legal Defense: How We can Help

As we've discussed, the chemicals used in many Synthetic Stimulants change very often. In fact, Synthetic Drug chemicals change so quickly, that state and federal legislatures have trouble passing laws to keep up with the change in stimulant composition. It's very difficult for a layman to understand if the chemical composition of a substance is illegal or not. This is a burden that the prosecution MUST meet beyond a reasonable doubt when they bring the allegation of a crime against you. In McFadden V United States, the Supreme Court agreed unanimously.

But drug charges are also challenged for other reasons. Sometimes, in attempting to prepare a case against you, the government will collect evidence unlawfully. Specifically, they will collect evidence by means contrary to the 4th amendment of the US Constitution that protects against “Unreasonable Searches and Seizures”. When this occurs, your attorney can file a motion to suppress the evidence that was unlawfully obtained to convict you.

Legal experts call illegally obtained evidence the “Fruit of the Poisonous Tree”. In this case, the evidence is the “fruit”, and the means used to collect it is the “poisonous tree”. The reason that this evidence can be found inadmissible is because of the Constitution's Exclusionary rule which not just protects against evidence that is directly illegally obtained, but also evidence that the government would not have access to had they not obtained an initial piece of evidence illegally (8). In this way, evidence that is wrongly obtained can taint all subsequent evidence in the prosecution's case just as one moldy tomato can cause the rest in the bag to go bad. At Kroger Law, we have the investigative tools and knowledge of how to use them to best represent you.