We’ve all seen police dogs in the airports and train stations or heard stories about dogs being brought to car stops to search for drugs. Sometimes the dogs are searching for explosives or other weapons, other times, they’re trying to find drugs. While it makes sense that police dogs are still searching airports and other areas for weapons, what about drugs? How have drug dogs changed since marijuana has become legal – recreationally and/or medicinally – in the majority of states in the country? 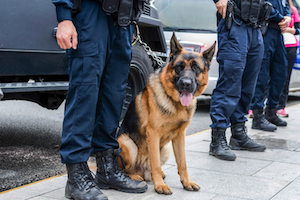 While it might seem simple – dogs are trained to alert to marijuana or other drugs, and if they do, that suggests the existence of those drugs – it’s actually more complicated than that. Dogs aren’t machines, and many external factors play a part in when a dog positively alerts to marijuana. Some of the primary issues regarding the reliability of drug searching dogs include the following:

Multiple studies suggest that drug-sniffing dogs are wrong almost half the time. This is clearly problematic. If an officer doesn’t have enough evidence to arrest someone and brings in a dog essentially on a hunch to look for something incriminating, they could end up alerting to marijuana or other drugs even if it there are no drugs. This could then give the officer reason to search the car, finding other illegal items.

Police May Cue Dogs to Alert

Another significant issue with dogs brought in to search for drugs is the possibility that the dogs are pressured to alert for drugs by police officers. This isn’t always done intentionally. There are small behaviors the officers might engage in that cause the dog to alert for drugs even when they don’t exist. In one study, dog trainers reviewed video from roadside searches where dogs indicated that drugs were present and found that the dogs were being cued by the officers, often unintentionally.

Dogs May Alert to Please Handler

We all know that dogs are man’s best friend. While this is great in most circumstances, this can create problems when it comes to dogs that are searching for drugs. These dogs are trained to find something and to please their handlers. Even if there aren’t drugs there, they may read the handler’s behavior, realize they want them to positively alert for something, so they do so even though no drugs are present. 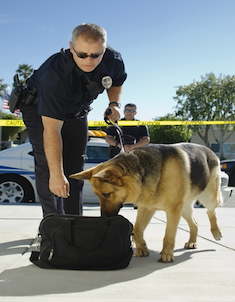 Because of the legalization of Marijuana, many California police departments are training new dogs that don’t detect marijuana. According to People v. Johnson (App. 3 Dist. 2020), the smell of marijuana is not enough for police officers to search a person’s car. Therefore, the logical step would be that it’s no longer permitted to use a police dog to search for marijuana. Once a dog is trained to alert to marijuana, it’s essentially impossible to untrain this behavior – so bring in the new dogs.

The rules surrounding marijuana possession and drug searching dogs are somewhat complicated because marijuana is still illegal under federal law. However, most states that have legalized marijuana have also had court rulings stating that the smell of marijuana alone is not enough for probable cause. Therefore, it makes sense that there would be no need for drug-searching dogs who alert to marijuana in a state where it’s considered to be legal. If you were stopped and a drug dog was used to find marijuana in your car or on your person, you should consider contacting an experienced criminal defense attorney right away. Even before the legalization of marijuana, there was some debate about the reliability of drug dogs. Now, that argument is even stronger, and it’s possible that evidence could be suppressed if it was recovered through use of a dog.

If you were arrested or believe you will soon be facing criminal charges, Attorney William S. Kroger is here to help. He has been practicing criminal law for decades and will do whatever it takes to defend you and get the best outcome for you possible. He cares about your case as much as you do. Don’t hesitate to reach out for a free, confidential consultation. Set up a meeting by calling 323-655-5700 or by messaging the office today.