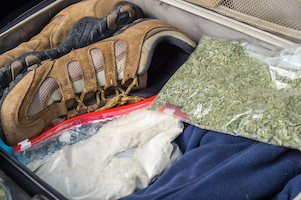 Airports such as LAX are known hot spots for drug related arrests. Ever since 9/11 airport security has been on a high state of alert, and any mistake or confusion on the part of a traveler in regards to the legality of marijuana may end up with them being detained and even arrested. Travelers are most frequently charged with violating Health and Safety Code Section 11350(a)—possession of illegal drugs. Airport laws are an intricate network of federal and state policies, and trying to figure out what’s legal under which jurisdiction can be an endless task. With the legalization of recreational marijuana use in some states, travelers can easily get confused with the different laws regarding cannabis and be charged with drug possession and face jail time if they happen to attempt traveling with it.

If you or someone you love is facing criminal charges after an airport drug arrest, we can help you and may be able to get your charges dropped altogether. Call the Law Offices of William Kroger today to learn more about your rights. Schedule a free consultation with one of our attorneys at 323-655-5700.

Despite the fact that recreational use of marijuana became legal in California on January 1, 2018 with the passing of Proposition 64, the laws regarding the possession of marijuana at an airport are still wildly confusing. Even though technically the Los Angeles Police Department allows passengers to carry small amounts of marijuana, the Transportation Security Administration (TSA) is governed by federal law, under which marijuana is still considered a Schedule I controlled substance and thus illegal. If a TSA agent discovers cannabis in your bag during a security check, you will be reported to the airport police.

Attempting to travel with marijuana is not a good idea, even if you have a medical recommendation from a doctor. Despite states making strides in legalizing marijuana, it is still not legal to fly with cannabis in your luggage. It doesn’t matter if both the state you’re leaving from and flying to have legalized the use of the drug. On a federal level, marijuana is still illegal, and federal law governs airport rules.

Penalties For Flying With Marijuana

Penalties for trying to fly with marijuana depend on the quantity that you’re traveling with. Possession of less than an ounce can result in your marijuana being seized, a citation with a later court date, and a fine of up to a $100. Possession of more than an ounce of marijuana will likely result in your arrest, and a misdemeanor charge with a maximum sentence of six months in county jail, as well as a fine.

A drug charge, no matter how small, can have grave consequences and serve to damage your personal and professional reputation. Attempting to understand airport rules and regulations when it comes to the possession of marijuana can be stressful and confusing. Los Angeles drug offense attorneys understand the complexity of drug charges involving airport arrests, and how intricate these cases can be due to the location and all the different laws involved. Thankfully the attorneys at Kroger Law have vast experience handling a variety of airport drug arrests, and sometimes getting the charges dropped altogether for our clients. If you have been arrested for possession of a controlled substance at any airport in the Los Angeles area, including LAX, Long Beach Airport, or Burbank Airport, you should speak with an attorney right away. Call the Law Offices of William Kroger today at 323-655-5700 to schedule a free consultation.