Home
Criminal Defense
Marijuana Charges
What If I Get Caught with Weed While Flying?

What If I Get Caught with Weed While Flying?

With weed being legal in California, more and more people are showing up to airports like the Santa Monica Airport hoping to bring their weed along with them. However, many people may not know that they can still face penalties for attempting to bring weed onto a flight, even though it may be legal in California. What happens if the TSA catches you with weed? 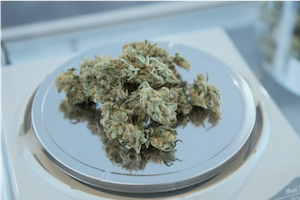 Since marijuana is legal in California, the TSA will likely confiscate the weed should they find it during the screening process. However, they may still contact local authorities if the amount of weed in your possession is too high or if you are not of a legal age to possess it.

If caught with illegal amounts of weed, you may face penalties pursuant to §11357 of the California Health and Safety Code.

While weed is legal here in LA, the situation remains more complex due to the nature of air travel. We’ll discuss more in detail below.

However, if you are currently facing charges for possession of marijuana, contact us at 323-655-5700 to schedule a free consultation to discuss the details of your case. William Kroger is an expert in drug law and has more than two decades of experience dealing with marijuana related charges of all types. The sooner you contact us, the sooner we can begin preparing your defense.

Penalties for Marijuana Possession When Flying in LA

The first, and most important, aspect to understand about marijuana and air travel is that the TSA operates under federal jurisdiction, not state. While weed may be legal within California law, the TSA is bound by federal law, and therefore could technically notify federal law enforcement.

However, they are unlikely to do so.

What Does This Mean For LA Residents?

Since recreational marijuana is legal in California, what would happen if an LA resident got caught with weed in somewhere like the Santa Monica Airport?

The short answer is that, in California, if you are over 21 and caught with a legal amount of weed, the TSA may simply confiscate it. However, it is still not advised to attempt air travel with marijuana, especially if it is not legal in the state you are flying to.

There are several circumstances where the TSA may still contact local law enforcement, such as when you break California state law. We’ll discuss this below.

If you are caught in an airport with illegal amounts of marijuana, or are not of legal age to possess marijuana, local law enforcement may charge you with penalties pursuant to §11357 of the California Health and Safety Code (HSC):

Special Circumstances and Other Questions Can I Fly with Weed If I Have a Medical Marijuana Card?

No. Medical exemptions for cannabis are irrelevant outside of the state in which the exemption is issued, and airplanes are under federal jurisdiction so there are no exemptions to the illegality of cannabis.

If you are flying between states, then your medical marijuana card will likely not be valid in the state you are traveling to anyway.

What if I’m Flying Between Two States Where Weed is Legal?

Will the TSA Find Weed in My Checked Bag?

Probably. It is more likely that the TSA will find weed in your checked luggage because checked bags are randomly searched at a higher rate than carry-ons. Just like you, your checked bag goes through a number of screening procedures to ensure there is nothing illegal or dangerous in it.

Can I Take Hash/Oil/Edibles on a Plane?

No, you cannot take any form of cannabis on a plane. Hash, oil, resin, wax, and edibles are all considered forms of concentrated cannabis, which is regulated under the same laws as flower, but possession limits are lower.

In California, you may only legally possess 8 grams of concentrated cannabis compared to 28.5 grams of flower cannabis.

Does the TSA Look for Marijuana?

In an Instagram post on the TSA’s official account, they clarified that TSA screening procedures are focused on identifying potential threats to airport security, and, as such, TSA officers do not specifically search for marijuana during the screening process.

However, just because they aren’t looking for it doesn’t mean they won’t find it. TSA screening procedures regularly reveal drugs of many types. There may also be sniffing dogs present at the airport.

In California, drug dogs and their handlers likely won’t do much with personal amounts of marijuana other than simply confiscating it for disposal. Still, it’s safer not to take that gamble and leave your weed at home when traveling.

What if I am Found with Weed After Landing in LA?

If you are found with legal amounts of weed after landing in LA and are on your way to exit the airport, they won’t do anything. You are unlikely to be found in the first place since arriving passengers are not typically screened at all.

Realistically, you are on California soil with an amount that is legal in this state, so they probably won’t care. If you possess illegal amounts, that is when it becomes an issue and you could be charged as described above.

While you may not face any legal action for attempting to travel with personal amounts of marijuana here in LA, it is still not recommended to try. At the very least, it will likely be confiscated and you will lose it forever.

If you attempt travel with larger amounts of marijuana, or are not of a legal age to possess it, that is when you may face more serious legal action from local enforcement agencies. Still, you can rest assured that if you forget or accidentally leave small amounts of weed in your bags when flying out of LA, it will likely just be confiscated.

However, if you are currently facing any marijuana related charges, you should contact us immediately. William Kroger is an expert on marijuana law here in California and has successfully defended against drug charges of all types. If you need a criminal defense attorney here in LA, William Kroger and the rest of our trusted team here are your best option for a successful defense.