The Los Angeles Municipal Code has an entire section dedicated to regulating and outlining penalties for unlicensed marijuana operations within LA. These penalties can have far reaching consequences, affecting not only owners of unlicensed businesses, but also their employees and landlords. 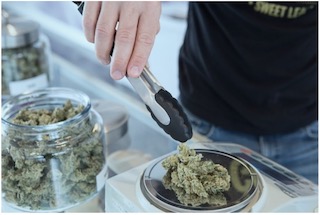 LAMP §104.15 outlines the penalties for anyone involved in unlicensed marijuana activity, including owners, landlords, employees, and contractors. The penalties for violations of this section include:

This section can be complex, and the penalties increase daily. We'll explain the entire section in more detail below, including the additional building code violations you may face.

However, if you are currently facing charges for violation of LAMP §104.15, or any other marijuana related business or personal charges, contact us immediately at 323-655-5700 or right here online for a free consultation. William Kroger is an experienced LA drug crime attorney with a long history in marijuana law, and he and our legal team here represent your best chance for a successful defense.

Los Angeles Municipal Code §104.15 deals entirely with the enforcement and compliance of unlicensed marijuana activity within the city, including commercial grow operations, illegal commercial sales, and even medical marijuana collectives.

Here's what you need to know about LAMP §104.15 broken down in plain English:

Essentially, this section dictates that anyone involved with an unlicensed marijuana business can be charged with a violation of section §104.15 and receive the penalties which we'll outline below.

What Are the Penalties for Having an Illegal Marijuana Business in LA?

The penalties for a violation of Los Angeles Municipal Code §104.15 come in several forms, both monetary and otherwise. We'll break them down by category.

It is important to note that each day the violation continues is treated as an entirely new offense. The penalties will accumulate, up to a maximum civil fine of $20,000. If you don't have a financial interest in the unlicensed operation, you may instead be given a citation through LA's Citation Enforcement Program and avoid a misdemeanor charge, though this is not guaranteed.

One of the most far-reaching effects of LAMP §104.15 has to do with the way in which it affects landlords or owners of the property on which the unlicensed business or collective was operating.

As a landlord, or anyone who owns, leases, or rented the property to the unlicensed commercial operation, you are fully liable and will face the exact same charges and penalties. This also applies if you are allowing the commercial activity to operate there for free or without any formal pay arrangement.

Simply put, if they are operating on your property, you could face the same charges and penalties.

Can I Be Charged Even If I Didn't Know My Tenant Was Operating Illegally?

What Are the Penalties for Having an Illegal Marijuana Operation on My Property?

The penalties for being the owner or landlord of the land or property on which the unlicensed activity was taking place are the same as the penalties already outlined above.

The code makes no distinction between the parties involved in the unlicensed activity, regardless of their knowledge of the activity or not. As a landlord, you will be charged the same as those operating the business.

In addition to the enforcement penalties laid out in LAMP §104.15, landlords could also be charged with a building code violation pursuant to Los Angeles Municipal Code §12.21.

LAMP §12.21 is a general provision against using a property in a way for which it was not licensed for, and carries administrative fines based on the number of previous offenses and square footage of the property. The exact fine varies based on those two factors, with a minimum of $1,000 and a maximum of 64,000 for very large buildings for which three or more citations have already been issued.

This general charge is often used against landlords to further ensure compliance with marijuana licensing within the city. The chart detailing the structure of the fines can be found within LAMP 11.2.04.

Illegal Marijuana Businesses on Your Property: How We Can Help

LAMP §104.15 and §12.21 both have far reaching effects, not only on the owners of the unlicensed business but also on those who may have had no knowledge of the illegal nature of the business, such as landlords and employees.

We understand the severe impact even a minor drug related misdemeanor charge in LA can have on a person's life, and we strive to ensure you will not have to face that reality.

William Kroger has been a known and trusted LA drug crime defense attorney for decades, and knows the drug codes forwards and backwards. He, along with the rest of our legal team here, have a proven track record for having drug charges in LA reduced or dropped entirely.

If you are currently facing charges for violation of marijuana licensing laws in LA, or any other drug related charge, contact us immediately for a free consultation to discuss your case. We are your best chance for a successful defense against criminal marijuana charges here in Los Angeles.