Most people are aware that certain crimes prohibit them from being a gun owner. Many people don’t know that simply possessing a medical marijuana card can make it illegal for them to own or possess a firearm. This is a federal crime and one that should be taken very seriously. While it may not seem fair to penalize someone for using a medication that is perfectly legal in the state of California, it’s a bit more complicated than that since marijuana is still considered illegal at the federal level.

Despite the fact that marijuana is legal in California and can also be used medicinally in California, it is still considered a controlled substance, and recreational use is illegal at the federal level. When you fill out the application to purchase a gun, there is a question that asks whether you’re an unlawful user of marijuana, or if you’re addicted to marijuana (or other substances).

Common sense might suggest that someone using marijuana medicinally and legally as prescribed by a doctor isn’t using unlawful drugs or addicted to marijuana. However, federal law sees this differently. If you have a medical marijuana card, the only correct answer to this question on the gun application is yes. Under Federal law, having a medical marijuana card prohibits you from purchasing or possessing a firearm. The state of California doesn’t expressly prohibit residents from buying guns if they have medical marijuana cards, but the federal statute makes this irrelevant. If you attempt to purchase the firearm anyway or get caught with the gun, you can be charged under federal law for illegally possessing a firearm and lying on your

The Courts Have Ruled This Ban Constitutional 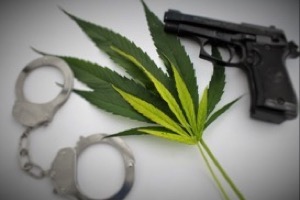 As you can imagine, this ban has upset and angered a lot of people. Why should someone be punished for using a medication that is legal in the state they’re living in? Well, unfortunately for many, the Ninth Circuit Court of Appeals issued a decision upholding this ban and ruling that it is constitutional. There is no unlawful interference with a person’s 2nd amendment rights. For the time being, it’s still entirely illegal to purchase a gun if you have a medical marijuana card, and there’s not much you can do about it.

If you are convicted of making a false statement to a licensed firearms dealer, you could be sentenced up to ten years in jail. Reporting that you are not addicted to marijuana or any illegal substances while having a medical marijuana card would be considered a false statement. Keep in mind that the application includes a warning after this question, which should put you on notice of how to answer the question. The warning informs the applicant that using or possessing marijuana remains unlawful under Federal law. It goes on to state that it doesn’t matter if it has been legalized or decriminalized.

Attorney William S. Kroger has The Experience You Need

Having to choose between using medicinal marijuana or owning a gun can be challenging for many people. Unfortunately, this is a decision that must be made. In the future, the federal government might decide to truly legalize marijuana, which in turn would likely change firearm laws. However, this hasn’t happened yet. You might think that no one will find out if you try to purchase a gun anyway, but it’s simply not worth the risk. If you were arrested or believe you will soon be facing criminal charges, Attorney William S. Kroger can help you. He is admitted to practice in several federal jurisdictions and is capable of handling any type of criminal offense in the state of California. Attorney William S. Kroger will do everything necessary to protect you and your rights. Don’t hesitate to reach out for a free, confidential consultation. Set up a meeting by calling 323-655-5700 or by messaging us today.