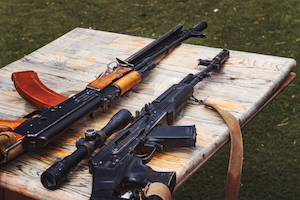 Our Second Amendment of the Constitution guarantees our right to own guns. Each state has their own laws on how to regulate gun ownership. The state of California has quite strict gun laws that dictate who can own a gun and what kind of gun they can own, with public safety in mind. You cannot sell, lease or transfer firearms without possessing a license. And having a license, only allows you to sell specific weapons such as pistols. You would need another type of permit in order to sell more dangerous types of weapons such as assault rifles or machine guns. Illegally selling firearms in California can result in severe charges. If you have been accused of illegally selling guns, contact the Law Offices of William Kroger at (323) 655-5700 to schedule a free consultation.

Under California law every gun purchase has to occur through California licensed dealers, via the Dealer’s Record of Sale (DROS) procedure. This includes private party transactions as well as gun sales at gun shows. This procedure guarantees that the person purchasing the gun is of legal age and a legal resident of California. Certain antique guns that are over 50 years old are exempt from this requirement.

Before someone can purchase a firearm, they have to undergo a Personal Firearms Eligibility Check, or a background check to determine whether there is anything prohibiting them from owning a gun. If you have a previous conviction for a felony (such as felony drunk driving), or certain types of misdemeanors, or have a domestic restraining order, you are automatically not eligible to purchase firearms. If you suffer from mental illness, are addicted to drugs, or are under the age of 18, you are also not permitted to own a gun. After a completed background check, there is a 10-day waiting period before a gun can be transferred from seller to purchaser. Some people can be exempt from the waiting period, but it doesn’t apply to general public, only dealers and collectors who have the appropriate certificates, as well as police officers.

Under California Penal Code 26500 PC, “No person shall sell, lease, or transfer firearms unless the person has been issued a license.” A firearm is a gun such as a pistol, rifle, shotgun, or handgun. A firearm can also be a rocket or any similar device. On the other hand, a BB gun or pellet gun are not considered firearms and do not fall under this law.

In order to be convicted under Penal Code 26500 the prosecution has to prove that you:

There is no restriction on how many handguns a person can own in California, but there are restrictions on the type of weapon and magazine size that someone can purchase. For example, it is illegal to own a semi-automatic weapon or to sell large-capacity magazines (a magazine that is able to accept more than 10 rounds).

Violating Penal Code 26500 is a misdemeanor charge, with each gun sold potentially being a separate charge. If you are convicted, you can face up to 6 months in jail and up to $1,000 in fines.

If you get charged with the illegal sale of firearms, there are different defense routes you can take. Perhaps you did actually have a valid license, in which case the sale was not illegal. Or maybe you were selling an antique weapon that was not loaded, in which case you could qualify for an exemption.

There are other people who get exemptions from prosecution under Penal Code 26500, such as:

There are also many instances where people are roped into selling a gun to an undercover cop. At times these types of transactions can involve coercion, and thus for your defense you can show that the charge falls under police entrapment.

California gun laws are complex, and you need someone who not only thoroughly understands them but who can also expertly navigate them with ease. Prosecutors are hard on gun crimes, and they shoot for severe penalties that can alter your entire life. Facing this charge alone is not a gamble you want to take. If you are looking at a charge of illegally selling a firearm without a license, we can help. Contact the Law Offices of William Kroger for a free consultation at 323-655-5700.