In Gardena, California, there are countless regulations related to firearms. These regulations control everything from the purchase, possession, and use of firearms within the borders of the State of California. However, most gun crimes are related to the ownership and unlawful use of firearms. Gardena gun laws are very strict, which can lead to serious criminal penalties. If you have been charged with a gun crime in L.A. County, your first action should be to hire a criminal defense attorney with experience with gun crimes. 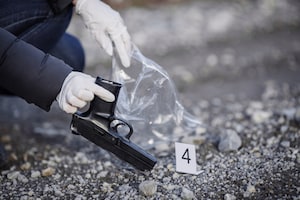 California gun crimes cover the entire spectrum of criminal law, from the lowest of misdemeanors up to serious felonies. Gun laws in California are complicated, with dozens of exceptions and special rules that relate to some gun crimes but not others. An experienced California criminal defense attorney will be able to advise you when and where you can own and carry a firearm.

Unlawful use of a Gun vs. Possession of a Gun in Gardena, CA

The majority of California gun crimes relate to either unlawfully using a firearm or unlawfully possessing one. California has a series of statutes related to owning or possessing guns; each of them is unique and carries its own penalties. The most common gun crimes involving unlawful use include:

The most common gun crimes involving unlawful possession of a firearm include:

Elements and Potential Penalties for Conviction of a Gardena Gun Crime

The elements a prosecutor must prove to convict you of a gun crime and the potential punishment you might face can vary greatly depending on which California gun crime you are charged with. The most serious of these crimes can cost you years of your life in prison.

Unlawful use Crimes in Gardena Brandishing a Weapon

It unlawful pursuant to California Penal Code § 417 to, while in the presence of another person, draw or an exhibit a gun in a rude, angry, or threatening manner. Additionally, Section 417 makes it is illegal to use a firearm in a fight or quarrel unless otherwise allowed by law. It doesn't make any difference if the firearm is loaded or not; you can be convicted of brandishing a weapon whether it is loaded or not.

It is a misdemeanor to brandish a pistol or other gun that can be concealed in a public place. Doing so carries a jail sentence between 3 months and 1 year as well as a maximum fine of $1,000. It is also a misdemeanor to brandish any firearm anywhere other than a public place, which is punishable by at least 3 months in jail and at most 1 year in jail. Finally, brandishing an imitation firearm carries a minimum sentence of 30 days in jail.

You will be charged with a wobbler in cases where a weapon was brandished at a child day-care center that is open, in the presence of a peace officer, or against the occupant of a motor vehicle. Wobblers charged as misdemeanors carry a sentence of between 3 months and 1 year in jail. Wobblers charged as felonies carry a sentence of between 16 months and 3 years in prison.

Finally, brandishing a firearm is a felony if it is done with the intent of preventing or resisting arrest and carries a maximum sentence of 4 years in prison.

California's drive-by shooting law which applies to Gardena is fairly broad; it is not only illegal under California Penal Code § 26100 to discharge a firearm from a vehicle, but it is also illegal to allow someone else to do so. That means both the shooter and the owner may be charged. It isn't necessary for the vehicle to be moving for this statute to apply.

Assault With a Firearm in Gardena

Under California Penal Code § 245(a)(2), it is unlawful to assault another person with a firearm. In this case, assault is the unlawful attempt to commit a violent injury with the present ability to do so.

Shooting at Dwellings, Vehicles, or Aircraft in Gardena

Grossly Negligent Discharge of a Firearm in Gardena

It is a violation of California Penal Code § 246.3 to negligently discharge a firearm. Grossly negligent means discharging the gun in such a way that could result in injury or death to a person. This applies to firearms as well as BB guns. Negligent discharge is a wobbler that carries a maximum sentence of 3 years in county jail.

Unlawful Possession Crimes in Gardena, CA Felon With a Firearm

According to California Penal Code § 29800, it is unlawful for anyone convicted of a felony, convicted of a domestic violence charge, or addicted to narcotic drugs from owning, possessing, purchasing, or receiving a firearm. A conviction under section 29800 is a felony that can also lead to a revocation of your right to own a firearm, potentially for the rest of your life.

California Penal Code § 25400 makes it illegal to conceal a firearm on your person or in your vehicle. It is important to note that you can only be convicted if you knowingly concealed the weapon. If you were unaware of the firearm you aren't guilty of the crime. The statute also makes exceptions for carrying a firearm that is unloaded and either locked in the trunk of your vehicle or in a locked container.

Carrying a concealed firearm in California is a misdemeanor that has a maximum sentence of 1 year in jail. However, the charge may be enhanced to a felony if you:

Carrying a Loaded Firearm in Public

Every California gun charge has different defenses that you may be able to rely on. Not all defenses are available for all gun charges. However, here are some of the most common defenses relied on for gun charge cases: