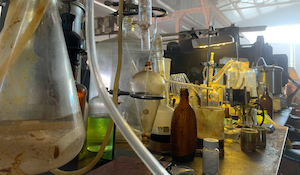 The dangers of methamphetamine are widely known, yet a large market for this highly addictive drug still remains. And unlike cocaine, which usually comes to the United States through the southwestern border, methamphetamine can be made right here at home, on American soil. In order to satisfy the market with product, drug manufacturers work in secret laboratories, known as meth labs, all over country to produce meth. From large super labs that produce great quantities of meth, to smaller and less advanced ones—methamphetamine is a big business. It may not be a great selling point for our state, but California is home to a great number of these types of labs. Operating an illegal meth lab in California is a felony, and will result in a prison sentence and large fines. If you have been charged with operating a meth lab, contact the Law Offices of William Kroger at (323) 655-5700 to schedule a free consultation.

Authorities pursue meth labs with dedication because they pose several major threats to public safety. For one, a meth lab explosion can be disastrous. And in the meth lab business, explosions are not all that uncommon. Labs are a notorious fire and explosion hazard for many reasons. The chemicals being mixed are highly combustible and in the hands of an untrained “cook” they become ticking time bombs. Aside from fire they can also create toxic fumes that are released into the air in the surrounding area.

The manufacturing of meth is a big problem for authorities because meth is a drug that can practically be made anywhere. Of course a super lab can produce a much larger quantity of the drug, but super labs are typically associated with more organized crime syndicates such as the Mexican cartels, who can afford to run such high-scale operations. The majority of meth labs are a lot smaller, and can be run from garages, mobile homes, hotels, storage rentals, etc. Most meth labs do not have sophisticated cooks with chemistry majors who produce high quality product. They are amateur labs with just enough knowledge to produce and sell to the local population.

Health and Safety Code 11379.6 is a statue that prohibits the manufacturing of controlled substances. It makes it illegal to manufacture, produce, process and prepare meth, amongst other things. So, it doesn’t matter if you’ve actually finished producing meth in your lab, as any stage of the process is strictly illegal.

Meanwhile Health and Safety Code 11366.5 makes it illegal for a person to knowingly allow another person to manufacture, store or sell a controlled substance at a building they manage, or a room, space, building or property which they own.

There are numerous defenses that an experienced attorney can raise to a drug manufacturing charge. Maybe the charges against you are completely false and made up, or perhaps the police evidence was obtained by not following legal search and seizure methods. Another common defense is to show that you weren’t actually running a meth lab, but were only in the stages of preparing to run one. Preparing is not a crime in itself. Yet another defense to this charge is to assert that you got caught up with the wrong people and just happened to be in the wrong place at the wrong time. Whatever the particular circumstances surrounding your case may be, hiring a lawyer who has a long history of defending drug charges is a good idea.

Trying to fight charges of running a meth lab on your own is a very risky gamble. After all, if you lose, you might be spending substantial time in prison and paying high fines. That’s why we recommend hiring a lawyer that has experience defending drug charges. At Kroger Law we have a lot of experience helping people fight all types of drug charges. One of our clients was arrested for possessing 220 kilos of cocaine in his truck, and we worked hard until we got him a verdict of not guilty. No matter what our clients are accused of, we try our best to get them top-notch results.

If you or someone you love have been accused of operating a meth lab, you need a criminal defense attorney. We’re here to help, contact the Law Offices of William Kroger for a free consultation at 323-655-5700.