Possession of drugs or other illegal substances the federal government has deemed "controlled substances" isn't always a crime. According to the Department of Justice (D.O.J.), drug possession accounts for over 80% of all drug-related arrests in the U.S. However, drug possession can be legal in certain circumstances, such as possessing a controlled substance under a doctor's supervision or for scientific research.

Drug possession becomes illegal only if you are unable to comply with any legal justification – and certain substances, like cocaine, heroin, and marijuana, are never legal at a federal level.

What Is a Controlled Substance?

Under U.S. law, a substance is considered to be "controlled" if it is solely available (if at all) through a valid prescription or other legitimate means. The Controlled Substances Act classified controlled substances into five "schedules" – the most dangerous substances are in Schedule I and the least in Schedule V.

For more information on drug scheduling, visit the D.E.A. website.

What Is Illegal Drug Possession?

In order to be arrested for drug possession, an individual needs to meet two criteria; 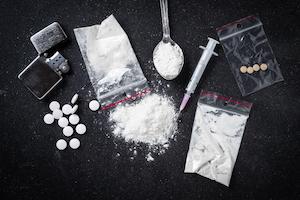 Drug possession laws extend beyond the drugs themselves. For instance, possessing precursor chemicals used to make drugs or drug paraphernalia is also considered a criminal act. Drug paraphernalia includes bongs, syringes, pipes, and other similar items. However, these items can be used for non-criminal purposes and so require additional evidence to connect the item with drug use, e.g., drug residue.

The penalties for drug possession are wholly determined by the type of substance, substance schedule, the quantity, and the purpose of your possession.

Otherwise, simple possession is most frequently treated as a misdemeanor. Defendants may be subject to fines or probation and rehabilitation programs. In contrast, being charged with possession with intent to distribute results in fines up to $100,000 and potential incarceration of 10 years or more – depending on the drug and quantity in question.

For example, possessing a large quantity of a Schedule I drug like LSD, heroin, or marijuana is likely to lead to a larger fine and longer prison sentence than a Schedule V drug such as low codeine cough syrup.

In certain states, marijuana is now considered legal – if not recreationally, then medicinally. There, you are able to use the substances without repercussions; however, it is technically a violation of federal law.

Whether you were in possession of a controlled substance for personal use or with intent to distribute, violating the drug possession laws can be a serious offense. In 2018, nearly 300,000 people were held in state and federal prisons for drug law violations.

Even if the potential penalty is not great in your case, a criminal record can affect your ability to get a job, house, or occupational license. Contact the Law Office of William Kroger, Attorney at Law, for a free consultation. Call us today at 323-655-5700.