Police Misconduct In A Criminal Case 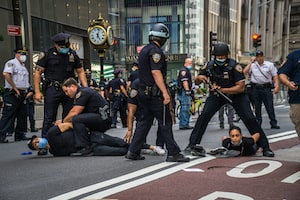 Police officers are charged with protecting their communities and acting with a high degree of standards, ethics and integrity. And while most of them do just that, there are times when some officers do not live up to these standards, and resort to different forms of misconduct, which can have a large negative impact on society as a whole, as well as on a criminal case. This type of misconduct can lead to wrongful convictions and innocent people spending their life in prison. There is a broad range of actions that can fall under the umbrella of police misconduct, but a few of the most common examples are excessive force, coercive interrogation, illegal searches, and false arrest claims.

Police officers who abuse their power cause great damage, which is why it’s vital to fight for justice in any case involving police misconduct. If you or someone you love is facing criminal charges, and you suspect you have been a victim of police misconduct, we can help you, and may be able to get your charges dropped altogether. Call the Law Offices of William Kroger today to learn more about your rights. Schedule a free consultation with one of our attorneys at (323) 655-5700.

What Is Police Misconduct?

Common examples of police misconduct include:

How Can Police Misconduct Affect A Criminal Case?

It can be difficult for a citizen to speak out about police misconduct, since they typically would need to report it to the same agency that they are accusing of wrongdoing. But it’s crucial to ensure that officers live up to high standards, and are not treated as if they are above the law. If an officer uses excessive force or makes a false arrest, they need to be held accountable. Police misconduct can have a large effect on the outcome of any given case. For example, you can create reasonable doubt in the minds of a jury if they question the integrity and trustworthiness of the law enforcement who provided it. And an experienced criminal defense attorney can also use police misconduct to get criminal charges dismissed altogether. At times, you can even bring a civil claim against the police department and win financial damages.

We have vast experience handling a variety of criminal cases involving police misconduct. If you believe that you’ve been a victim of police misconduct, you should speak with an attorney right away. Call the Law Offices of William Kroger today at (323) 655-5700 to schedule a free consultation.