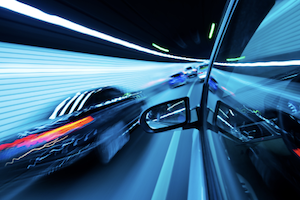 Los Angeles is a city of stars, glamour and fast cars. Our roads are swarmed with sports cars that are made for fast driving and not the stop-and-go traffic that plagues our city. Sometimes drivers decide to ignore the rules, put the pedal to the metal, and test the speed limits of their car by racing each other. Although it may sound like a fun idea and look cool in Fast & Furious, street racing is illegal in the state of California. If you have been charged with the crime of street racing, you are at risk of losing your license and going to jail. We have extensive experience with all types of moving violations. Contact the Law Offices of William Kroger at (323) 655-5700 to schedule a free consultation and see how we can help.

Vehicle Code 23109 makes it illegal to engage in street racing, referred to as “a speed contest,” in California. In order to be convicted of violating Vehicle Code 23109, you have to participate in a motor vehicle race that takes place on a highway and is against another motorist or against a clock.

To further break it down, this law specifically refers to people inside of a motor vehicle such as a car, bus, or a motorcycle. This does not include scooters, bicycles, or boats. In order for this violation to be considered street racing it has to take place on a highway, that is any type of public road or highway. In order to be accused of breaking this law you have to be willfully engaged in the race. And lastly, you have to be found to be competing against another vehicle or against the clock, otherwise you’re not street racing, you’re simply speeding.

Most of the time street racing in California is a misdemeanor crime, resulting in up to 90 days in county jail and up to a $1,000 in fines. You will also have your driver’s license suspended for up to 6 months and your vehicle impounded for up to 30 days. These penalties can be more severe if you have prior street racing convictions or if someone is injured during the race.

A prosecutor also needs to show that you are racing against another motorist or a clock. Although there are exceptions to the clock rule. It is not illegal to race against the clock if you are traveling a route that is longer than 20 miles, and if you are not breaking the speed limit.

If you have been charged with the crime of street racing in Los Angeles, we can help. Our attorneys are experienced in handing all types of moving violations. Contact the Law Offices of William Kroger for a free consultation at 323-655-5700.