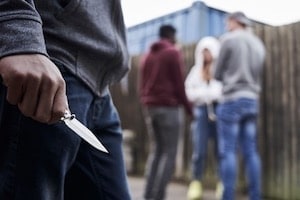 Voltaire's famous quote, "I disapprove of what you say, but I will defend to the death your right to say it", perfectly synthesizes America's attitude about freedom of speech. As Americans, we take great pride in our ability to express our thoughts freely and without censorship. But although freedom of speech is not only an essential part of American life but also a constitutionally protected right, there are some exceptions to it. Criminal threats, formerly known as terrorist threats, are one such exception. The First Amendment does not entitle you to threaten other people's safety and cause them to fear for their life. Criminal threats are taken very seriously in California, and if you have been accused of this crime you should seek legal counsel right away. If you need advice or are seeking representation, give the Law Offices of William Kroger a call at (323) 655-5700. The first consultation is free.

What is the Definition of a Criminal Threat?

Under Penal Code Section 422 a criminal threat is any threat that has the specific intent of making another person fear death of great bodily injury.

In order to prove the charge of a criminal threat, the prosecution must demonstrate that:

For example, a man sees his ex-girlfriend coming out of the movie theatre with a new boyfriend, and he goes up to the couple and pulls out a knife and threatens to kill them. You also don't need a weapon for a threat to be credible. For example you can email your ex-husband and say that you are going to set his house on fire. You can be charged for a criminal threat even if you do not have the means or intention to carry out the threat.

Penalties for a Conviction of Criminal Threats

The offense of criminal threats is a "wobbler" crime in California, meaning it can be charged as a misdemeanor or felony. The charge will depend on the circumstances of your specific case as well as your own criminal history. If you're wielding a deadly weapon while making a threat, you are more likely to get a harsher sentence.

This crime falls under the "Three Strikes" Law, meaning that if you get convicted you could go to prison for as long as 25 years. You will also incur heavy fines, probation and a criminal conviction that will stay on your record for life.

Not every threat is considered a criminal threat. For example if you get fired and you tell your boss to "watch out", you would not be prosecuted for making a criminal threat since the statement is too ambiguous and does not make your boss fear for his life in that very moment. Oftentimes if a threatening statement is made electronically via text or email, the other person might reply and say, "You don't scare me", which is very useful evidence that shows they were not in immediate fear for their life.

At times we say things in the heat of the moment that we may greatly regret later on. Even if you say something you don't mean or something you don't intent to go through with, if the threat if perceived to be credible, you might still be charged with making a criminal or terrorist threat. Let us help you with this very serious accusation. Call Kroger Law Group at (323) 655-5700 to schedule a free consultation.