Smuggling is the act of transporting prohibited goods across a border or into a building to avoid regulatory oversight, prison rules, import or export restrictions, or other forms of unwanted attention. Smuggling narcotics or weaponry is often the first assumption when people hear the word "smuggling". However, smuggling contraband, like Cuban cigars, animals, and other prohibited products, is considered smuggling under the broader smuggling laws.

Smuggling is perhaps most commonly associated with the southern U.S.-Mexico border. Here, the Mexican cartels smuggle narcotics and other controlled substances across the border, leading to a spiral of crime and violence. However, smuggling can occur across any border or into prison facilities.

In this article, we will explain what the smuggling laws encompass, what the penalties are, and what you should do if you're facing a charge for smuggling narcotics or contraband.

What Are the U.S. Smuggling Laws? 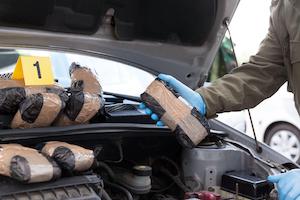 In the U.S., smuggling is a federal crime involving the transportation of goods across a national border – although state-to-state smuggling does exist, e.g., transporting Burmese Pythons to Florida. The most common items involved in smuggling include narcotics, Cuban cigars, weapons, plants, and animals.

Goods can be smuggled either by concealing the item on a person or in their baggage or by moving the goods across the border without detection, e.g., in planes, boats, or trucks. Underground tunnels are used in the narcotics trade between the U.S. and Mexico.

Smuggling Narcotics and Contraband Into Prison

In prison, narcotics or contraband can pose a safety risk to the inmate and prison staff alike. All prison services work to eliminate the smuggling of contraband into the system. The list of prohibited items likely includes:

Wardens can take a strict approach to contraband, meaning anything handed to a detained person will violate the state laws.

In California, violation of PC 4573.5 is considered a felony, punishable by imprisonment in state prison for up to three years. The type of contraband determines the length of the sentence.

The prosecution of U.S. smuggling laws is covered by 18 U.S. Code § 545, which states that a defendant should be fined or imprisoned for no more than 20 years or both. Under this law, smuggling crimes include:

As with all such felonies, the sentence and punishment given reflect the merchandise being smuggling and the quantity. For example, smuggling a cache of AK-47s is likely to result in a substantial prison sentence compared to a pack of Cuban cigars. Moreover, a smuggler's criminal history also impacts the eventual sentence.

To determine the smuggling sentence, basic point-based guidelines are used. The base point value spans 26 to 43 points, depending on the product or drug, criminal history, and if any deaths occurred due to the smuggling of narcotics or contraband.

When smuggling narcotics, the minimum prison sentence will be around ten years, alongside up to $50 million in fines.

The state of limitation for all smuggling charges is five years, after which point, a person cannot be charged. In certain cases, a person may still be liable for conspiracy charges, meaning the statute doesn't begin to run down until after the last act associated with conspiracy.

Smuggling charges are an extremely serious crime, carrying the potential for substantial fines and lengthy prison sentences. Speak to an experienced defense attorney to discuss your case, identify defense strategies, and give you the best chance of avoiding conviction or minimizing your sentence.

Call William Kroger Attorney at Law at 323-655-5700 or contact us online for a free and confidential consultation.