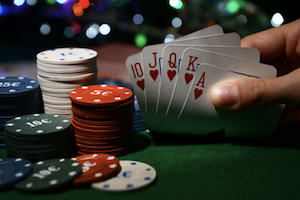 Gambling is a regulated activity in the state of California. This means that some forms of gambling are considered legal, while others are not. Gambling has to be approved through a license and is regulated by the Gambling Control Act. Oftentimes people get confused in regards to gambling laws and wonder if they are breaking the law by hosting a night of poker in their house for a group of their friends. In general, informal gambling is not a crime. However, it is illegal to play “banking” or “percentage” games in California. If you have been arrested for the crime of illegal gambling, contact the Law Offices of William Kroger at (323) 655-5700 to schedule a free consultation.

Penal Code 330 makes it a crime for any person who “deals, plays, or carries on, opens, or causes to be opened, or who conducts, either as owner or employee, whether for hire or not” any of these games for “money, checks, credit, or other representative of value.”

Banking games are those that have a “house” or “bank” that takes money from those who lost and pays out money to those who win.

Percentage games are games of chance where the “house” takes money from a portion of the bets.

There are some legal variations of these illegal games that are allowed to be played in Native American Casinos. One such example is the game of Craps which is illegal due to its use of dice, but which has a legal card variation in the casinos.

Authorities are not after friends who get together to play poker inside of a house. They are focused on shutting down places where gambling is illegally available to the public, such as illegal gambling parlors.

People charged with violating Penal Code 330, who are found playing or betting at or against these games, will face a charge of a misdemeanor, a fine of up to a $1,000 and a sentence in county jail of up to 6 months.

There are some common defenses to the charges of illegal gambling. One such defense is that you were not really involved in the gambling, you just happened to be at the location. Your simple presence at a location does not equal in you committing a crime. Another defense is that you were running a charity game where there were no banking or percentage games involved. Whatever the case is, if you were charged with the crime of illegal gambling, you should speak with a Los Angeles criminal defense attorney right away so that they can start working on your defense.

Authorities are very serious about shutting down gambling parlors and any other places that offer illegal gambling activities. Although gambling may seem like a harmless crime, they are concerned with the fact that many times gambling parlors are conduits for other types of criminal activities such as prostitution and drug use/drug dealing.

You may have found yourself in one of these places by mistake or were taken by a friend without really realizing where you were going. A lot of people get swept up in the wide net crackdowns police have on these types of operations. If you want to keep your record clean and avoid going to jail and incurring heavy fines, you may want to consider hiring an experienced criminal defense attorney. If you have been accused of participating in illegal gambling in Los Angeles contact the Law Offices of William Kroger for a free consultation at 323-655-5700.