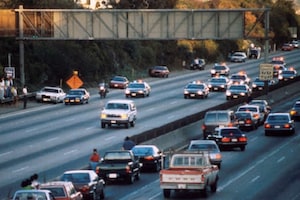 How Does The Law Treat Evading Arrest?

In California, the law has several classifications for evading arrest based on the context of the crime. Essentially, these are split into:

*with additional penalties for harm caused and recklessness exhibited during evasion.

What Are the Elements to an Evading Arrest Charge?

Evading arrest when a person driving a car or other motor vehicle willfully flees or attempts to elude a pursuing peace officer AND all of the following conditions exist:

Los Angeles criminal defense attorney, William Kroger, will work with you diligently to determine whether all of these elements were met at the time of your arrest and to create a defense strategy best for your case.

What if I Am Accused of Evading Arrest From a Police Officer on a Bike?

Evading arrest from a police officer on a bike occurs when you flee or attempt flee that officer AND all of the following conditions exist:

What Is the Difference Between Misdemeanor Evasion and Felony Evasion?

Both Misdemeanor and Felony evasion have the same elements and conditions that must be satisfied. However, felony evasion also entails the accusation that the pursued vehicle is driven in willful disregard for the safety of persons or property. Because recklessness makes evasion more dangerous, the punishment is more severe.

William Kroger is a Los Angeles criminal defense lawyer well versed in the nuances between misdemeanor and felony evasion charges. Call his office at (323) 655-5700 today for a free consultation.

What Is a “Willful Disregard for the Safety of Others or Their Property”?

Under CA Vehicle Code 2800.2 (b), this is can be proven by evasion where three or more violations occur that would have each been assigned a traffic violation point.

Willful disregard can also occur where there is damage to property.

What Are the Felony Penalties for Selling Evading Arrest?

The penalties for selling imitation drugs may include

If there is serious bodily injury caused:

If there is death caused:

What Are the Misdemeanor Penalties for Selling Evading Arrest?

Up to 12 months in county Jail

Strategies to defending an evading arrest charge may include:

As you can see, charges for evading arrest can carry heavy penalties with life altering consequences, especially when they are attached to other charges. It’s important to retain a solid, knowledgeable LA criminal defense attorney to stand by your side.

William Kroger has been a trusted figure in the LA criminal defense system for decades, and along with the rest of our team here, has a proven track record for having such charges reduced or dropped entirely.

If you are facing charges for evading arrest, contact us as soon as possible right here online, or at 323-655-5700, for a free consultation to discuss the details of your case. The sooner you get in touch, the faster William and his team can begin preparing your defense.