Possession of Promethazine for Sale 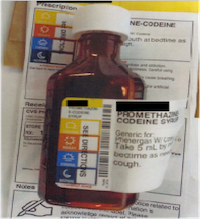 California Health and Safety(HS) code 11350 (a) makes it a misdemeanor to possess a controlled substance for personal use without a valid, lawful prescription.

Promethazine with codeine is medication commonly prescribed by doctors as a cough syrup and falls within the category of substances banned under code 11350. Promethazine with codeine has tranquilizing and euphoric effects and is sometimes misused for those reasons. In recent years it has gained popularity among teenagers looking to get high. Promethazine when mixed with soda and candy is known as lean. Lean has gained traction as a party “drug,” particularly among teenagers and young adults. Other common names for the mixed drug are purple drank and sizzurp.

Promethazine can be found in various forms such as syrup, gels or capsules and the effects of misusing it can include:

Possessing, possessing with the intent to sell, selling, or transporting promethazine with codeine comes with a wide array of penalties ranging from one year in jail to up to 9 years in prison and thousands of dollars in fines. A skilled and experienced attorney can evaluate the charges against you and help you obtain the best possible outcome.

California Penalty for Violation of HS 11350

A violation of the Health and Safety Code 11350 is a misdemeanor punishable by up to one year in jail and a fine of up to $1,000.

California Penalty for Violation of HS 11351

A violation of California HS 11351 is a misdemeanor and can be punished by up to five years in prison and up to $10,000 in fines.

California Penalty for Violation of HS 11352

Even a minor possession offense can have lasting consequences including loss of gun rights, loss of employment, eviction, and immigration consequences for those who are not citizens of the United States.

Possible defenses to these charges are that the police engaged in misconduct or improperly handled evidence you did not actually possess or control the substance, the substance was for your own personal use, and that you had a valid prescription. The right defense strategy can result in reduced or even dismissed charges.

Gathering evidence, speaking to witnesses, and interviewing police officers early on in your case is crucial to composing an effective defense. Hiring a skilled legal expert at the beginning of your case will give you the best chance of a successful outcome.

William Kroger offers free consultations because he understands what an important decision it is to choose the right attorney. Please reach out today online or at 323-655-5700.