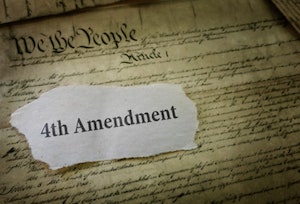 If you have been arrested in Los Angeles or in LA County, you may have experienced the police searching your person, your home, or your vehicle. In almost all circumstances, either your consent or a lawful warrant is required. Indeed, the Fourth Amendment to the U.S. Constitution guarantees you protection from unlawful searches and seizures. In fact, unlawfully confiscated evidence is called the "fruit of the poisonous tree". This is because unlawfully obtained evidence, regardless of its significance, is not admissible in court. Still, there are exceptions to the warrant requirement of the police search.

So, if you think you were the subject of an unlawful search and seizure, continue reading to make sure an exception to the warrant requirement did not apply in your case. But also, if you have not done so, it is important to speak to an LA County criminal defense attorney, one with the insight derived from years of experience, to know whether your Fourth Amendment rights were violated.

William Kroger defends his clients with a comprehensive approach to the law. He will thoroughly review your case and identify if any constitutional violations have occurred. And if he finds that there has been one, he will move the court to exclude the evidence flowing from that constitutional violation. Thus, it is critical to seek criminal defense legal representation from someone whose first instinct is NOT a plea deal but to approach your case from all angles to both comprehensively and aggressively fight for you.

Exceptions to the Fourth Amendment Requirement in Los Angeles County

In Los Angeles County and throughout the United States, the Fourth Amendment provides protection against illegal search and seizure. This means if an officer knocks on your door and asks to come in, you do not have to let him in unless he has a valid warrant to do so. If that officer does come in against your will without a valid warrant and takes what he believes to be evidence, that constitutional violation can be a powerful tool your defense attorney will use to exclude the same evidence. Likewise, if the officer used a defective warrant to obtain access to your property and your person, that is yet another powerful tool your defense lawyer can use to suppress evidence.

When law enforcement does search your person or property and seize any property without a warrant or with a defective one, an experienced attorney will file a motion with the court to exclude the evidence. The prosecutor will likely raise an exception to the warrant requirement. You should know what these exceptions could be so you are informed.

If you give your consent to a search, you basically waive your Fourth Amendment right against a warrantless search and seizure. The police have the authorization to search, but this authorization is limited to the terms of your consent. In this respect there are a few things to keep in mind:

The plain view exception is a commonly used one. It refers to evidence that is in plain sight -- conspicuous and visible to the police officer. When an officer is in a location lawfully, for instance, either in your home via your consent or at a traffic stop outside your vehicle, then seizing evidence in plain view that may indicate a crime was committed is lawful without a warrant. This also includes seizing property evidence of a crime when it is visible from public spaces. The Supreme Court confirmed in Minnesota v. Dickerson (1993) that you do not have “a legitimate expectation of privacy in contraband left in the open which is viewed by an officer from a lawful vantage point.”

In Horton v. California (1990), the defendant was suspected of using a machine and stun gun to steal jewelry and cash. The police obtained a valid warrant to search the defendant's home for the stolen property; the warrant did not authorize the search of weapons. No jewelry or cash was found. But in plain view, the police saw the guns -- they did not need to search enclosed spaces like a closet for the guns because they were in plain view for all to see. The defense argued that the search and seizure of the guns was unlawful, but the court found the search was permissible. Search Incident To A Lawful Arrest in LA County

A warrantless search incident to a lawful arrest is also lawful. If there is probable cause to arrest you, then the police have the authorization to search:

These searches incident to a lawful arrest are permitted by the courts because they see it as a two-fold protective measure:

Any contraband found during a search incident to a lawful arrest may be seized lawfully. This exception is derived from a U.S. Supreme Court decision in California v. Chimel (1969). In this case, a man was arrested for stealing coins from a store. The police took an hour to search his home where the coins and other contraband were found. The Court deemed the search excessive and unreasonable but took it as an opportunity to proscribe to what extent a search and seizure is lawful incident to an arrest.

This exception has since been clarified in later cases:

The Automobile Exception in LA County

As mentioned above, an automobile may be searched without a warrant they the police have probable cause to believe there is evidence of a crime in the vehicle. It was the Supreme Court in Carroll v. United States that explained adeptly why an automobile serves as an exception to a warrantless search: a vehicle is moveable. The court found it is impractical for the police to obtain a search warrant and then search a vehicle for the very fact the vehicle can be easily moved to another location, including another jurisdiction. This exception was later applied to boats in the United States v. Villamonte-Marquez case in 1983. In this case, the police boarded a private boat and smelled marijuana, so they searched the boat. It was deemed permissible without a warrant because a boat can easily be moved as well.

But whether it is a car or boat, probable cause must exist.

Probable cause is a high standard to meet. It is a higher standard than reasonable suspicion that is used by an officer to pull someone over for a traffic stop. Probable cause requires something more specific that indicates a crime has or is being committed. For instance, a police dog sniffing and finding drugs is permissible and can be used as probable cause.

When a police officer reasonably suspects a person is committing or about to commit criminal activity, the officer may stop and pat down that person for weapons.

In the case of Terry v. Ohio (1968), the U.S. Supreme Court confirmed the legality of a stop and frisk. In this case, several men were pacing outside a jewelry store. An officer suspected they were “casing a job”. The officer stopped the men and searched their persons for weapons. John W. Terry had a concealed weapon in his pocket. A stop and frisk is now also known as a “Terry stop.” It allows the police to conduct only a pat down to discover concealed weapons. A more invasive search is not permitted, like reaching into pockets or searching undergarments.

The exigent circumstances exception to the Fourth Amendment warrant requirement allows the police to seize evidence if they reasonably fear it is in imminent destruction, alteration, or loss. The circumstances must be urgent.

For example, an officer walking by a home hears someone scream and conducts a wellness check. Once inside the home, the officer sees drugs and drug paraphernalia in plain view. It is reasonable to believe the drugs may be moved or destroyed by the time the officer obtains a warrant for a search and seizure. The confiscation of evidence -- the drugs and paraphernalia -- would likely be allowed.

Law enforcement has the burden to prove that exigent circumstances existed.

Hot pursuit flows from the exigent circumstance exception. This doctrine states a person should not be allowed to evade arrest by fleeing from a public place to a private one. If the police have probable cause to arrest you and is in hot pursuit of you, the police can -- if the pursuit began in a public place -- enter a private residence without a warrant to detain the suspect.

In order for this exception to work, the State must show that it was objectively reasonable for

Good faith is the burden of the State to prove, and the likely factors to determine it include:

There are four circumstances in which the good faith exception will fail, and your criminal defense attorney will consider each one to determine if it can be raised to argue against the State.

If you have been charged with a crime, it is important for your criminal defense attorney to review your case thoroughly. William Kroger will review your case thoroughly. Part of this review is an examination of police conduct. If a Fourth Amendment violation has been made, William Kroger will make sure an exception does not apply. And even then, if an exception is applicable, he will still look to ways to argue against it -- it is the State's burden to prove the exception. Contact us today to get started on your criminal case.