Home
FAQs
What Does BAC Mean in a Los Angeles Criminal Case?

What Does BAC Mean in a Los Angeles Criminal Case?

In California, you can be charged with Driving Under the Influence (DUI) if your blood alcohol concentration (BAC) is too high, even if you don't seem impaired. The “per se DUI” is based on whether your blood, breath, or urine test shows a BAC above the legal limit.

What is the Legal Limit for Blood Alcohol in California Drivers?

California state law makes it a crime to operate a vehicle with a BAC above a certain number. That number varies depending on factors including if you are driving your personal car, carrying paying passengers, or are underage. The most common offense is driving with a BAC of .08 or higher.

The government doesn't have to prove whether you are actually impaired or under the influence of alcohol if they can prove that your BAC is above the legal limit. Some common per se limits are:

Some of these BAC numbers are so low that you may not realize you are above the legal limit. You may not even appear impaired to a trained professional, just blowing higher than the limit is enough to be charged with this per se DUI. 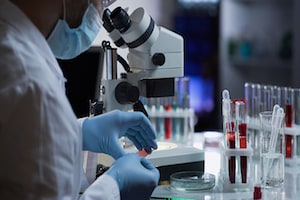 Courts rely on BAC measurements taken at the side of the road, in doctor's offices, and at police stations to determine if you are guilty of a per se DUI. But these tests aren't perfect, and they can lead to false results even when a cop does everything by the book. That's why it's essential to contact a dedicated criminal defense attorney who is experienced in DUI cases. Don't accept a number at face value. Contact Kroger Law Group today at 323-655-5700 or use the contact page to set up a free, confidential consultation.

What is BAC and What Exactly Does it Measure?

The number is given in a percentage (.08%) because it is tied to how much blood you have in your body. A larger man has more blood in him than a smaller woman. If both have a BAC of .08%, the man will have more alcohol in his body than the woman. If you think about it, this makes sense. The average large man can drink more alcohol than the average small woman without appearing intoxicated.

How is Blood Alcohol Concentration Measured?

The three most common tests for alcohol are blood, breath, and urine. Blood tests are by far the most reliable. Breath tests are more convenient for the police and are more likely to be done at the side of a road than any other test. Urine tests are a last resort in California, but they are still used when other methods are unavailable.

The only way to measure your blood alcohol concentration is by measuring your blood for alcohol. Yes, it seems simple. But experienced criminal defense lawyers know that cops and crime labs make mistakes all the time. And we know where to look for evidence that a mistake was made in your case.

Common problems with blood-drawn tests occur because the blood sample changes hands many times before it is tested, and the results make it into an official report. Even a simple case involves multiple people as the sample and results passed from nurse to cop to crime lab to cop to prosecutor. Samples are identified by bar codes and serial numbers. One wrong digit can put someone else's test in your file.

Even when the correct sample is identified, lab techs make mistakes during testing. Sometimes an independent lab will find a lower BAC level than the state-run lab using the same blood sample.

The Kroger Law Group also looks at the timing of the blood test and what was going on before the test. The prosecution must prove that your BAC was above the limit while you were driving, not after you were stopped. It takes time for alcohol to get into your blood, and we know how to use that fact to your advantage in crafting your defense. That's also why it's important to get started on your defense as soon as possible. The longer you wait, the harder it is to find witnesses and establish a timeline of when the alcohol hit your system.

Many people make the mistake of assuming that cops wait for an actual BAC measurement to file charges. Most cases start and end with a breath test, not a blood test. The thing is, you can't measure BAC using breath. Breathalyzer-style tests are only an estimate of BAC based on a mathematical formula applied to the amount of alcohol in the air when you breathe out deeply.

Some people aren't medically capable of breathing out hard enough to get a valid BAC estimate using their breath. Every machine is different, and the force necessary for one machine may not be enough for the same company's newest model. Some devices have complicated calibration systems that produce wildly inaccurate numbers if not set up correctly.

Even when the machine is running perfectly, and you blow with the necessary force, the estimate of BAC is only as good as the math used to estimate the amount of alcohol your lungs and convert it to an estimate of alcohol in your blood. The scientific formula used to make the conversion is called the "partition ratio." California law sets the partition ratio of alcohol in deep lung breath to blood alcohol at 2,100 to 1. But scientists know that every person's partition ratio is different, and it can change depending on your situation.

Breathalyzer tests can be inaccurate because:

You should know that DUI lawyers like William Kroger regularly study and develop new approaches to defeating breath tests in court. New problems with Breathalyzer-style machines are discovered all the time, and your case may have been affected by one of these problems.

Urinalysis is commonly used to test how your body is processing the things you eat and drink, but it isn't typically used in California DUI cases. There are two ways to test for alcohol in urine, and both of them are less reliable than either blood or breath tests.

First, you can test the urine to see if alcohol is present. Second, you can test for the byproducts of alcohol. Both tests can detect if someone has alcohol in their system, but they can be affected by how much water you drank, what you ate, and even if you have a yeast infection. That's why California only allows urine tests to be used as a last resort when blood and breath tests are unavailable or not possible in a particular case.

This information should show you that we don't accept a high BAC test result at face value. You shouldn't either.

You deserve a California DUI lawyer who has been 100% defense-oriented his entire career. Instead of prosecuting pro se DUIs, William Kroger chose to fight the power of the prosecution and defend people like you from bad science and faulty assumptions. Act quickly to set up your free, confidential consultation. Call Kroger Law Group today at 323-655-5700 or send us a message right now.