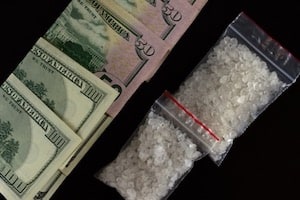 Methamphetamine is a drug that affects the nervous system. It is a highly addictive stimulant known also as meth, crystal, ice, and chalk. It is a white, odorless crystalline powder that dissolves quickly in water or alcohol. It was initially developed in the early 20th century from the drug amphetamine. Methamphetamine, however, is a stronger, more potent drug than amphetamine: with comparable doses, more methamphetamine gets into the brain. It causes decreased appetite, talkativeness, increased activity, and -- among other effects -- euphoria. Its effects last longer and can be more harmful. Methamphetamine was used originally as nasal decongestants and bronchial inhalers, but today it is used medically for conditions like ADHD and obesity.

The drug has a high potential for addiction. And its illegal use is widespread. Possession of it can get you into serious trouble. William Kroger is a smart, resourceful drug crimes defense attorney in L.A. County. He has a compassionate ear and will listen to your side of the story and use that as a basis for your defense strategy. He is honest, direct, and will tell you what you need to hear, not what you want to hear. His primary goal is protecting your rights and freedom and -- depending on the circumstances of your case -- either (1) making sure you do not end up with a criminal record that can destroy your future, or (2) making sure if sentenced you receive as low a term as possible so your time in jail or on probation is as minimal as possible. Contact the office today to set up a free initial consultation.

What do California's Criminal Laws say About Possession of Methamphetamine?

Methamphetamine is a Schedule II controlled substance. This means (1) it is highly addictive; and (2) it serves (or can serve) some medical purpose. When prescribed to a person, which is rare, the doses are extremely small and the prescription is nonrenewable.

According to Health & Safety Code § 11377, it is illegal to possess Methamphetamine without a prescription for personal use. A conviction can lead to certain penalties as outlined by the same section of the Health and Safety Code.

What are California's Penalties if Convicted of Possession of Methamphetamine?

Possession of methamphetamine had been a wobbler offense. This meant the prosecutor could charge a person in possession of meth as either a misdemeanor or felony -- depending on the facts and circumstances of your case. This changed after November 4, 2014. Proposition 47 changed the law so that simple possession -- not the intent to sell or manufacture or other drug crime -- of methamphetamine and other illicit drugs can be charged only as a misdemeanor.

Penalties for Simple Possession of Methamphetamine

If you are convicted of a misdemeanor possession of Methamphetamine, then you can anticipate jail time of up to 1 year. You can also expect fines, probation, and/or community service.

For many of you, you may qualify to participate in California's drug diversion program (PC 1000) or California's Proposition 36 program. Both programs require drug treatment classes. PC 1000 diversion program is shorter in length, generally requiring 6 months of drug treatment and then 12 months of informal probation. Proposition 36 program is longer (around 3 years) incorporating more stringent drug treatment classes, testing, and counseling. These programs can keep your record clean if completed successfully, and in the meantime, they can keep you out of jail.

Penalties for Possession of Methamphetamine With a Qualifying Prior Conviction

If there exists a qualifying prior conviction, then you can expect a sentence to include incarceration of up to one year. You can also expect probation or community service.

In addition to these penalties, other consequences of a possession of meth offense include things like:

A conviction of simple possession of methamphetamine, therefore, carries more than penalties as outlined by law, but consequences imposed by society. You can pay back your “debt to society” but that doesn't mean society will easily forgive you. That's why fighting the charge is often in your best interests. Drug crimes attorney William Kroger will explain all your options with you so that you can determine which is best. For many of you, that will likely mean fighting the charge to clear your name.

What Must the State of California Prove in Order for a Jury to Find You Guilty of Possession of Methamphetamine?

There are specific elements of a possession of methamphetamine offense that must be proven in order for you to be found guilty beyond a reasonable doubt. A finding of guilt, however, is more difficult than many people realize. The State must prove each of the following:

What does this mean exactly? Below is a brief explanation of each of these elements.

Awareness of the Presence of Meth

Being in possession of meth is not enough to suffice a guilty verdict. You must know of its presence. This element protects those persons who possess the crystal without knowing it. Maybe you were taking a friend to school with you and he or she left some crystal in your car, either intentionally or negligently, and you had no idea it was there or what it even was if you found it there -- in this scenario, you are not aware of meth's presence in your vehicle. As such, you did not possess meth in violation of § 11377.

On the other hand, if you were in possession of the drug but didn't know that it was specifically meth because you thought it was cocaine, you are still in violation of § 11377. If you know the substance is an illegal drug, you are in violation of the substance. The State needs to show only the latter, and not that you knew it was a particular illegal drug. How does the State of California actually show this? Usually through circumstantial evidence, including the way you behave at the time of the incident or arrest or during any search and seizure -- like trying to hide the substance.

What are Defenses to a Methamphetamine Possession Charge?

According to Health & Safety Code § 11377 it is not unlawful to possess meth if you have a prescription for the same. Likewise, according to § 11377(c).

It is not unlawful for a person other than the prescription holder to possess a controlled substance described in subdivision (a) if both of the following apply:

This statutory defense, however, is rarely the situation in which a person charged with the offense finds him or herself. But that is no reason not to fight the charge. At all costs, it is usually in your best interests to avoid a conviction.

In cases where a client is not eligible for diversion or wants to contest the charge, one or more of the following defenses may be raised:

In addition to these defenses, if the police in any way abused their power or obtained evidence illegally, then we will file a motion to suppress the evidence, and if applicable, a motion to dismiss -- among other motions that are relevant and beneficial to your case. Without the evidence, the State of California has no case against you. And with the right attorney, a charge of meth possession can be fought successfully.

If you have been charged with simple possession of meth in Los Angeles or anywhere throughout L.A. County, it is important to hire the right lawyer immediately. Oftentimes this charge is in conjunction with related charges, like possession of meth for sale, possession of paraphernalia, DUI drugs, and drug possession for sale. Contact William Kroger Attorney at Law today either online or at 323-655-5700.