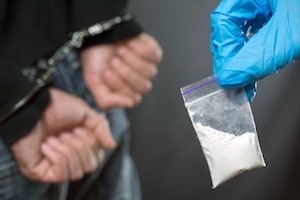 Whether your case is a misdemeanor or a felony, having a drug charge on your record can not only result in prison time, fines, and recovery programs—it can also mean being turned down for job opportunities, apartments, and, if you are a green card or visa holder, it can lead to deportation.

Due to the severity of the consequences, you need a knowledgeable and experienced LA criminal defense attorney on your side. William Kroger has spent decades learning LA drug laws inside and out, and he and the rest of our team here have a proven history of protecting people from drug charges by having them reduced or dismissed entirely. If you are currently facing charges for any type of cocaine possession, contact us immediately for a free consultation to discuss our case.

Cocaine is classified as a Schedule II drug, meaning that is has a very high probability of abuse, but also some medical applications as well. In California, the Health and Safety Code §11350 makes it illegal to possess any Schedule II substances without a prescription.

However, while cocaine does have some potential medical uses, there are other drugs that work better so it is never actually prescribed. This means that there is no legal reason to possess cocaine in any amount or form.

If you are charged with possessing cocaine or possessing cocaine for sale in Los Angeles, you need to contact a solid LA drug defense lawyer immediately. Because cocaine is such an addictive drug and is so closely linked with crime, law enforcement dedicates a lot of time and resources to prosecute cases involving cocaine.

Possession of cocaine can be divided into these three categories:

Simple possession of cocaine for personal use is a misdemeanor and can result in one year in county jail, up to $1000 in fines, or both.

If you have past convictions of a certain type, like murder, DUI/DWI manslaughter, sexual assault, or a few others, even your first offense of cocaine possession may be charged as a felony resulting in:

No matter the charge, an experienced Los Angeles drug defense lawyer can present different legal defenses on your behalf.

These are just a handful of all the potential strategies, and it will depend on the specifics of your case.

Our Experience: A Real Case Study and How We Can Help

In 2012, Mr. Kroger and his team secured a “Not Guilty” verdict for a client, following two hung juries. The client was alleged to have transported 220 kilograms of cocaine hidden in a secret compartment in an 18-wheel truck. The client pronounced not guilty and was released the day after.

Mr. Kroger has never worked as a prosecutor or in law enforcement, and has always been a 100% defense-oriented lawyer. He has dedicated his professional life to defending his clients and providing the best legal defense possible. When you hire William Kroger and the rest of our team here, you know that you have an attorney who has always been on your side.

Most criminal defense attorneys began their careers as prosecutors. After a number of years, they change sides and tell potential clients that this helps them “know how the other side thinks.” What it really means is that anyone who has worked as a prosecutor has imprisoned and taken money and property from the very same people they now represent.

With decades of experience, a proven track record, and a high level of trust within the LA criminal defense system, William Kroger and our team here is your best option for a successful defense. Contact us at 323-655-5700, or right here online, for a free consultation to discuss your case.

The sooner you contact us, the sooner we can begin preparing a successful defense.