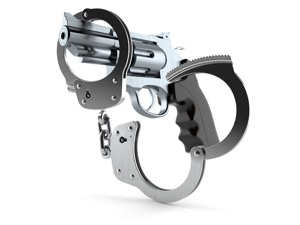 Being a felon in possession of a firearm in Los Angeles carries a penalty of:

However, this charge is not unique to LA or even California. It is a Class D felony under federal law. If you were convicted of a felony, or have a felony warrant out for your arrest, and are found in possession of a firearm then you could be charged in the State of California as being a “felon with a firearm.”

William Kroger has over 20 years of experience as an LA criminal defense lawyer in West Hollywood, and our legal team has a long proven track record of defending against felon with a firearm charges. If you are currently facing a firearm or drug related felony charge, call 323-655-5700 now for a free consultation so William and our legal team can begin preparing your defense immediately.

When Can I be Charged for Felony Possession of a Firearm in West Hollywood?

This restriction equally applies to any juveniles who have been certified to be tried as an adult in Los Angeles or elsewhere in the State of California.

What if I Didn’t Know I was in Possession?

If the prosecution can’t prove your awareness about the firearm in your possession, they cannot convict you. William Kroger and the rest of our team here can use this as a key piece in fighting your defense. It’s important that you reach out as soon as possible to us at 323-655-5700 to discuss your case for free so we can begin preparing that defense.

What Are the Penalties for Possessing a Firearm as a Felon in West Hollywood?

If you were convicted with a felony are found in possession of a firearm in West Hollywood or anywhere else in LA, you can face up to 10 years in prison and up to $250,000 in fines under federal law. However, under California State law, you can be charged with:

This charge is typically brought alongside other charges. William Kroger and our law team here must personally review all the details of your case in order to mount a comprehensive defense.

Legal Defense Strategies: How We Can Help Defend Felony Charges in West Hollywood

William Kroger is an experienced LA criminal defense attorney has over 20 years of history defending those who are being charged with weapon and drug related charges in West Hollywood, Beverly Hills, Santa Monica, and many other areas of Los Angeles. Our legal team’s proven record and decades of experience make us your best option for a successful defense.

Contact William S. Kroger, Attorney at Law and our legal team here at 323-655-5700 as soon as you can for a free consultation to discuss your case. The sooner you get in contact, the better chance we have at preparing a successful defense.