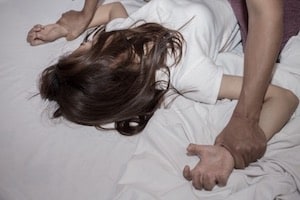 Facing rape charges can be a truly shocking experience, especially when the alleged victim is your spouse. It can ruin your reputation and your career and break your family apart. Many people falsely believe that you cannot be charged of raping your spouse because sex within marriage has unspoken consent. Whereas that used to be reflected by the law-until 1975 the rape of a spouse was legal-that is no longer the case. You can be charged with the rape of your spouse even if they did not physically try to fight you off or resist. At Kroger Law Group we understand the large impact this charge could have on your life. If you have been accused of spousal rape, call our office at (323) 655-5700 to schedule a free consultation.

What is Spousal Rape?

Rape is non-consensual intercourse between any two people    . Rape has several different categories such as date rape, statutory rape, spousal rape. Any case of rape is about consent. It does not matter if the victim is married to the perpetrator. But proving spousal rape can be more tricky.

Spousal rape carries the same punishments as rape. Depending on the circumstances, it carries a sentence of three, six or eight years in prison. You can be fined up to $10,000. You do not have to register as a sex offender if convicted of spousal rape unless the court orders you to do so.

There are different defenses to the charge of spousal rape. Your criminal defense attorney will go over the facts of your case and help you figure out which one is applicable in your situation.

Spousal rape is a serious accusation in the state of California. If you have been accused of spousal rape you are facing serious legal repercussions that can negatively affect the rest of your life. The attorneys at Kroger Law Group have been defending clients facing sex crimes charges for years. We understand how difficult these charges are for our clients and how important it is for them to clear their name. If you have been accused of spousal rape, call our office at (323) 655-5700 to schedule a free consultation.