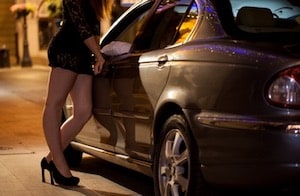 Prostitution is illegal in California, and so is the solicitation of it. However, many times innocent people get caught up in police stings that are meant to catch people soliciting sex. If you have been accused of soliciting a prostitute, call Kroger Law Group at (323) 655-5700 to schedule a free consultation.

What is Solicitation of Prostitution?

Prostitution and solicitation of prostitution are both sex crimes. A prostitute is someone who participates in sexual intercourse or other sexual acts with another person for money or other valuables. Soliciting a prostitute means to ask that another person engage in the crime of prostitution. For example, a man approaching a woman at a club and offering her $50 to go in the restroom and have sex with him. That is soliciting a prostitute, and the man is guilty even if the woman did not go through with the offer. Another example would be a police officer who offers to forgo writing a traffic ticket if the driver performs oral sex on him. Although he did not offer money in exchange for sex, this is still solicitation because he is offering something of value. Solicitation can also happen online, typically under the guise of internet escort services or massage parlor websites.

California Laws Regarding Solicitation of Prostitution

Under California's Penal Code 647 (b) you can be charged with solicitation of prostitution if:

This charge can be applied to either the customer or the prostitute. In order to be found guilty of this crime, a prosecutor has to show that the defendant intended to engage in the crime of prostitution. This can be done if the defendant offered to pay money or other valuables in exchange for sex.

Proof does not constitute of you simply being in an area known for prostitution, waving at a woman who might be a prostitute or standing around while scantily clad.

Solicitation of Prostitution Penalties in California

Soliciting a prostitute is a misdemeanor in California.

If you were using your car while soliciting a prostitute, the judge may also suspend your driver's license.

Defenses Against Solicitation of Prostitution

An experienced criminal defense attorney can help you fight charges of solicitation of prostitution.

Some common defenses are:

If you or a loved one have been accused of solicitation of prostitution, you need an experienced lawyer who knows what to look for in order to get your charges reduced or dismissed. A solicitation conviction can mean a permanent criminal record and a huge stain on your reputation. This is why you need a skilled criminal attorney who can help you navigate the system during this difficult time. We can fight solicitation charges on your behalf and do our best to get them dismissed. Contact the Law Offices of William Kroger at (323) 655-5700 to schedule a free consultation.