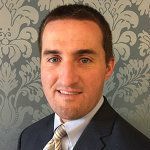 Born in Santa Barbara, California, Mr. Holbrook attended the University of California at Irvine where he earned a Bachelors degree in Political Science. He then attended Loyola Law School in Los Angeles, where he was editor of the International Law Review. He received his J.D. and passed the California Bar Examination in 2003. After working as a civil defense attorney, Mr. Holbrook made the switch to criminal defense and started work with the Kroger Law Group in November 2005.

Will Holbrook handles criminal and traffic law for Kroger Law Group, practicing primarily in Kern and northern Los Angeles Counties. He is also a capable civil and personal injury attorney and handles the unique cases that are brought in by the firm from time to time. He is licensed to practice in all state courts as well as the Southern and Central District courts in California. He has appeared in virtually every courthouse in the state and has handled thousands of cases.

Mr. Holbrook is a strong advocate on behalf of his clients and is calm and patient as he navigates them through the criminal justice system. As a young lawyer, Mr. Holbrook worked with several fine attorneys, including William Kroger, and he credits those mentors with developing his legal skill set. Mr. Holbrook's clients describe his honest, accountable and hard-working.

Mr. Holbrook does not source from a family of attorneys. Quite the opposite, in fact. His father was an archaeologist before working as a carpenter. His mother and stepfather are marine biologists. He grew up on the beaches of California and the prairies of Wyoming, along with every baseball field along the way. He is married and has two children.