What are the Penalties for Petty Theft in Beverly Hills? 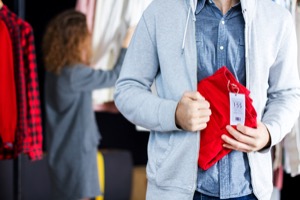 The penalties for petty theft in Beverly Hills, and elsewhere in California, are:

The charges for petty theft can take many forms, as it is a wide category of crime. We’ll discuss the definition of petty theft, how it could affect your immigration status, and how we can defend you against your charges in detail below.

If you are being charged with petty theft in Beverly Hills, or anywhere else in Los Angeles, call 323-655-5700 as soon as possible for a free consultation so we can discuss your case.William Kroger has over 20 years of experience as an LA criminal defense lawyer and our legal team here has a proven track record of defending against theft charges in Beverly Hills.

What Is Considered Petty Theft?

Theft is broken down into two categories under Chapter 5 of the California Penal Code: petty theft and grand theft. This statute applies to petty theft charges in Beverly Hills.

Petty theft is defined as theft of goods or services under a value of $950. However, there are several cases where your charge could still be considered grand theft even if the amount is less than that. These are defined under California Penal Code §484 and §487. A theft of any of these circumstances is defined as a grand theft:

These are just a few examples. There are many circumstances where a petty theft could be considered a grand theft, and the details of a theft case can be complex.

It is very important to get an experienced LA criminal defense attorney with a proven track record, like William Kroger and our legal team here, on your side in order to mount a successful defense. Call 323-655-5700 for a free consultation so we can discuss the details of your case and begin preparing your defense.

Is Petty Theft a Felony?

Petty theft is not considered a felony in Beverly Hills or anywhere else in LA. It is charged as a misdemeanor with a potential penalty of:

If you are only being charged with petty theft in LA, you are eligible for probation so long as the judge approves. Additionally, an experienced Los Angeles criminal defense attorney like William Kroger and our legal team here can potentially move to have the charge expunged once you complete your probation or jail time.

How Does Petty Theft Affect my Immigration Status in LA?

Since petty theft is a misdemeanor crime and only carries a potential jail time of up to 6 months, it does not immediately make you eligible for deportation.

However, this only applies if you have no previous record. Petty theft may be considered a CIMT or “Crime of Moral Turpitude” by the federal Immigration and Nationality Act, meaning that having two or more counts can make you eligible for deportation.

Additionally, a misdemeanor charge of petty theft will still appear on your permanent record and will factor into any future court decisions about deportation, should they arise. It is in your best interest to hire a trusted and experienced LA criminal defense attorney with a proven record to defend against petty theft charges in Beverly Hills. They may be able to have the charge reduced or dropped entirely.

Legal Defense Strategies: How We can Help

Because of the complicated nature of theft charges, it is important that you find an LA defense attorney who has the experience to understand and defend your case.

If you are facing a potential theft charge, it’s important that you contact us as 323-655-5700 for a free consultation as soon as possible so we can discuss the details of your case. The sooner you get in contact, the better chance we have at preparing a successful defense.