Restraining orders are an important part of LA County's domestic violence laws and aim to fill a gap between protecting the safety of a complainant and ensuring the due process rights of a defendant. Unfortunately, they are often abused by complainants and frequently favor their safety over your due process rights. 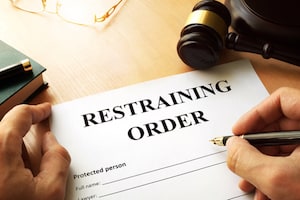 Violating a restraining order, though, is a serious criminal issue. Worse, it is easy to accidentally violate one and get accused of a severe offense when it was all just a mistake. Los Angeles Domestic Violence Lawyer William Kroger knows this, and can vigorously fight on your behalf if you have been accused of violating a restraining order in or near the city of Los Angeles.

Emergency restraining orders are meant to prevent violence or harm that seems imminent. They are often issued within minutes of their request by a magistrate or judge who is “on call” for just such a purpose.

In many cases, emergency restraining orders are requested by a police officer who is on the scene of a domestic violence situation. The officer calls the request in, and if the magistrate thinks a restraining order is warranted, it will take place immediately.

These restraining orders are issued ex parte, or without an opportunity to defend against them, and usually last for seven days. During that time, the complainant can go to court and ask that the order be extended.

A temporary restraining order is so commonplace that it is typically referred to as a TRO.

Complainants can get a TRO against someone else if they make a valid showing that they are the victims of harassment, or if they already have an emergency restraining order and want to extend it.

TROs generally last for two or three weeks. Courts will often hold a hearing towards the end to determine what should be done about the situation, going forward.

If the complainant wants to extend their orders of protection past the few weeks afforded by a TRO, they can move the court to issue a permanent restraining order. Because these orders can last for several years and can be a huge inconvenience for the subject of the order, courts require a hearing and a showing of evidence before they decide whether to make a protection order permanent.

Permanent restraining orders are likely to have specific rules about what kinds of contact or conduct are prohibited or permissible.

California Penal Code 273.6 makes it illegal to commit a knowing and intentional violation of a valid restraining order. This law directly applies to Los Angles County. Because these orders are put in place to ensure someone's safety and protection, the legal system vigorously prosecutes anyone who is accused of violating one. The penalties are high, particularly if the complainant suffered harm during the violation.

There are, however, several elements to the offense that can give rise to effective legal defenses.

A Knowing Violation in LA County

In order for there to be a conviction for violating a restraining order, you must have known about the restraining order's existence. If you did not, then there was no way for you to have committed a knowing violation, eliminating an important part of the crime: A culpable state of mind.

This is not a rare element to fall through the cracks. Restraining orders – particularly emergency restraining orders – are issued quickly and with very little process or fanfare. Some people literally come home from work to find that there is a restraining order preventing them from entering the house. If you have not been served with a restraining order or were never notified, it can prevent prosecutors from proving their case that you committed a knowing violation of the order of protection.

An Intentional Violation in LA County

Similarly, violation of a restraining order can only be a crime if the order was intentionally violated. Accidentally violating the terms and requirements of a restraining order is a common thing to happen – orders that require you to maintain at least fifty feet away from someone can be accidentally violated if you turn a corner and bump into the person you are supposed to stay away from. Prosecutors need to show that the terms of a protective order were not violated by mere accident in order to get a conviction.

A Valid Order in LA County

Because of the speed with which restraining orders are obtained, there are many instances where protocol is not properly followed and important steps are missed. These mistakes in the legal system can impact the validity of a restraining order. Proving that the order was correctly issued is up to the prosecutor, and is required for there to be a conviction for violating the restraining order.

Typically, violating a restraining order is a misdemeanor in Los Angeles. Therefore, a conviction comes with up to one year in jail and a fine of up to $1,000. However, the terms of probation are often more individualized for defendants who are convicted of a restraining order violation, and often involve additional requirements like domestic violence classes or counseling.

Additionally, there is a mandatory minimum jail sentence of 30 days if the complainant suffered a physical injury during the incident.

However, there is one important circumstance that can turn a restraining order violation into a “wobbler” that prosecutors can pursue as either a misdemeanor or a felony-level offense: If you have been convicted of a restraining order violation in the past seven years, and the current charge involves an act of violence or a credible threat of violence. If the prosecutor elects to pursue a felony charge, a conviction would come with up to three years in jail and a fine of up to $10,000. To retain a legal defense that can best protect you from these potential penalties, hire the best Los Angeles Domestic Violence Attorney, William Kroger.

There are, however, numerous Los Angeles restraining order defenses that can be raised against an allegation that you violated a restraining order. Some of these aim to dismiss the case, entirely, while others might be able to at least reduce the severity of the punishment you can face.

One of the elements necessary to prove a restraining order violation case is that you intentionally violated the order. Defending against the charge often involves showing that the alleged violation was accidental or simply an unfortunate circumstance.

While Los Angeles is a big city, two people who share social circles are bound to randomly run into each other at some point or another. These coincidences do not make a restraining order violation, so long as steps are taken to quickly vacate the area and make it clear that the encounter was accidental.

A restraining order can only be violated if you have been made aware of its existence and have had the opportunity to understand its terms. Proving that this was not what happened can be an effective defense in some cases.

The most common way for this to happen is for the complainant to initiate contact with you and say that they are having the order removed so you can make amends. However, only a judge can end a restraining order, and if you believe the complainant and take steps to continue talking in violation of the terms of the order and then the police are called, you can face charges for violating the order.

Proving that the violation was contrived by the complainant can be an effective defense, and at least reduce the severity of the penalties that you can face for a conviction.

If you have a restraining order against you or have already been charged with violating one in Los Angeles, hiring Los Angeles domestic violence defense attorney William Kroger can be the best move you can make. Contact him online or call his Los Angeles law office at 323-655-5700.