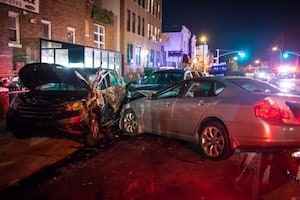 If you are driving a car and cause an accident that results in the death of another person due to negligence or violating a traffic law, you may be charged with vehicular manslaughter. This charge is very serious and could potentially alter your life forever, which is why it's in your best interest to speak with an experienced criminal defense attorney right away so they can build a defense case while the evidence is still fresh. At Kroger Law Group we understand the large impact this charge could have on your life. Call our office at (323) 655-5700 to schedule a free consultation.

What Is Vehicular Manslaughter?

Penalties for Vehicular Manslaughter in California

Under California Penal Code section 192, vehicular manslaughter is driving a vehicle with negligence that results in the death of a human being. The penalties for this crime can be divided according to the level of negligence you committed: gross negligence or ordinary negligence. Gross negligence is more than absentmindedness or an error in judgment. It's when a person acts recklessly and generates a possibility of death or great bodily injury. This act would be far removed from how an ordinary person would act under the same circumstances, and it shows blatant disregard for human life.

For a misdemeanor charge you face:

For a felony charge you face:

Being a part of an accident where someone loses their life is a tragic and traumatic circumstance. Having to face vehicular manslaughter charges on top of that can be a truly agonizing experience. But having an experienced criminal defense attorney in your corner can help you fight these charges. We can build a strong defense for you and help you get through this dark time.

Some common defenses include:

Any degree of vehicular manslaughter charges is serious and can have long lasting consequences. This is why if you are facing vehicular manslaughter charges you need to have a criminal defense lawyer. At Kroger Law Group we understand how much this charge can impact your life and we fight hard to get you a favorable result so that you can move on with your life. Call our office at (323) 655-5700 to schedule a free consultation.