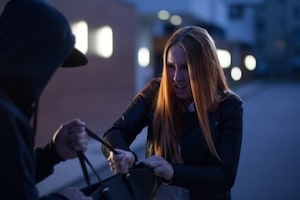 Robbery is a serious criminal charge that can carry a lifetime of consequences. A conviction for robbery can lead to a lengthy prison sentence and cost you thousands of dollars in fines. What's more, a conviction can make it difficult for you ever to obtain housing or employment again. If you’re facing robbery charges in Los Angeles County, contact an experienced Los Angeles robbery defense attorney right away.

The attorneys at Kroger Law Group have a proven track record of defending the rights of those accused of robbery in Los Angeles. Call us for a free consultation at 323-655-5700.

What is Robbery in California?

According to California Penal Code Section 211 PC, robbery is the “felonious taking of personal property in possession of another, from his person or immediate presence, and against his will, accomplished by means of force or fear.”

For a crime to be considered robbery, it has to include all of the following elements:

Penalties for a Robbery Conviction in Los Angeles

The prosecutor in your case will have no leeway in how your robbery case is categorized because robbery is always charged as a felony under California law. This means you are facing a potential sentence in state prison if you are convicted. The length of your potential sentence depends on whether you have been charged with first-degree robbery or second-degree robbery.

You will be charged with first-degree robbery if:

A conviction for first-degree robbery is punishable by 3, 4, or 6 years in California state prison.

The sentence would be enhanced to 3, 6, or 9 years in California state prison if you committed the robbery within an occupied residence with two or more other people. First-degree robbery also carries a maximum fine of $10,000.

A conviction for second-degree robbery is punishable by 2, 3, or 5 years in California state prison. In addition, it carries a maximum penalty of up to $10,000.

The punishment for robbery in California is severe, but thankfully there are a variety of potential legal defenses a robbery defense attorney serving Los Angeles can use to have your charges reduced or even win an acquittal at trial.

Here are some of the most common defenses in a robbery case:

The Difference Between Robbery and Burglary in California

Robbery and burglary are terms that are mistakenly used interchangeably by many people. Even though they sound similar, they are very different criminal offenses. Robbery is the taking of the property of another against their will through the use of force or fear. Burglary is the entering of a structure or vehicle with the intent to commit a theft or felony.

There are limited circumstances where you could be charged with both crimes. For example if you broke into a home with the intent to commit a theft, only to encounter the homeowner. If you then took property directly from the homeowner through the use of force or fear, you would likely be guilty of both burglary and robbery.

A robbery charge is very serious, but can be defensible, and with the right attorney, you may be able to limit the criminal consequences. In some cases, an experienced Los Angeles robbery defense attorney may be able to have the case against you dismissed completely.

If you have been charged with robbery anywhere in Los Angeles County, contact a robbery defense attorney serving Los Angeles right away. Kroger Law Group has years of experience defending those accused of robbery, call us at 323-655-5700 for a free consultation. With potential penalties this severe, it is in your best interest to hire an experienced criminal defense attorney to represent you in your robbery case.