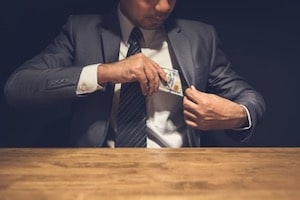 Embezzlement has often been viewed as a crime affecting the very wealthy, and only seen in movies. If the name Bernie Madoff rings a bell, it’s because he ran one of the largest embezzlement scams in history, totaling $50 billion. Madoff is a large-scale example of this white collar crime, as he took money from new investors to pay old investor’s “returns.” In 2009 he was sentenced to 150 years in prison for his crime. But the truth of the matter is that embezzlement can happen in any socioeconomic environment.

What is Embezzlement in California?

Embezzlement (California Penal Code Section 503 PC) is a type of theft, sometimes also referred to as employee theft. Under California law, embezzlement is defined as an unlawful theft of something that has been entrusted to you that belongs to another person. Most theft crimes involve the taking of someone’s property without their permission. Embezzlement is different in that the property was legally possessed by you at some point, but later it was taken without permission.

In order to be convicted of embezzlement, the prosecution must prove the following:

A good example of embezzlement is a store employee who pockets the money from every other sale, or an employee who decides to borrow rent money by writing a check on the company’s checkbook with the intent to eventually pay it back. Embezzlement does not have to involve money, it just has to involve you abusing your position of trust to take property that has value.

If you’ve been charged with the crime of embezzlement, speak to an embezzlement attorney serving Los Angeles right away.

Penalties for Embezzlement in California

Embezzlement charges depend on mitigating (helpful) and aggravating (harmful) factors, such as:

A conviction of misdemeanor grand theft embezzlement carries the punishment of:

A conviction of felony grand theft embezzlement carries the punishment of:

If you’re facing criminal charges for embezzlement in Los Angeles, speak to a Los Angeles embezzlement attorney right away. The consequences of being convicted of embezzlement are very serious, and your future might be gravely affected as it can be extremely hard to find employment with embezzlement on your record. Let us help, call the Law Offices of William Kroger for a free consultation at 323-655-5700.