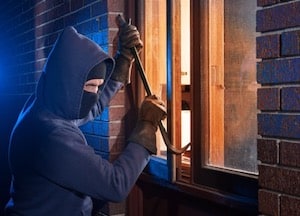 When you are arrested for burglary, your life can change in an instant. There are many circumstances that can lead someone to committing a burglary, but just because you were arrested for it does not mean you should necessarily be convicted. If you are facing a burglary charge, contact a Los Angeles burglary defense attorney right away.

At the Law Offices of William Kroger we are committed to protecting the legal rights of our clients and ensuring that they receive the best possible representation. Call us today for a free consultation at 323-655-5700.

What is Burglary in California?

Burglary usually conjures up the image of a masked individual breaking into someone’s home, but it can also be a break-in to a commercial building. California Penal Code Section 459 PC defines burglary as the entering of specific structures with the intent to commit theft or a felony inside.

What is First Degree Burglary?

Inhabited places are still considered to be inhabited if their occupants left the premises solely because of a natural or other disaster.

First degree burglary is committed even if nothing is taken, because the crime occurs at the moment one enters the residence with the required intent.

Second degree burglary also occurs at the moment of entry, whether or not anything is taken.

In order to be found guilty of either first or second-degree burglary, the prosecutor has to have enough evidence to prove both your actions and your intent. Just because someone enters a residence or a store doesn't mean they intend to steal what is inside. Statements made to police, your prior criminal history, witness testimony, and other evidence can prove or disprove intent. An experienced Los Angeles burglary defense attorney will examine the evidence in your case and help defend you in court.

What is the Penalty for a California Burglary Conviction?

A conviction for first-degree or residential burglary carries a penalty of:

A conviction for first-degree burglary also counts as a “strike” under California's Three Strikes law.

Misdemeanor second-degree burglary carries a county jail sentence of up to 1 year. It also carries a maximum fine of up to $1,000.

How can a Los Angeles Burglary Attorney Help Me?

An experienced burglary defense attorney serving Los Angeles knows that while every case is different, there are some common legal defenses to a burglary charge. At Kroger Law Group, we understand that every element of the burglary charge must be examined to find the best defense for your unique case. These are some of the arguments that have been successful in other cases:

At Kroger Law Group we can get started on your defense as soon as possible. In addition to these burglary defenses, we also examine every case to protect your rights. In many cases, we can start negotiating with the prosecutor before they decide whether to charge your case as a felony or misdemeanor.

The Top 3 Questions People Ask About Burglary in California

Here are three of the most common questions people have about burglary in California.

What is the Difference Between Burglary and Robbery?

It's a classic movie scene: a young woman comes home to find her door cracked open and her apartment torn apart. She sees the TV is missing, and she screams: “I was robbed!” The thing is, she wasn't robbed. But shouting “I was burglarized!” doesn't have the same ring to it.

Robbery is the taking of property from someone else against their will using force or fear. Burglary is different from robbery in three crucial ways:

What is the Difference Between Burglary and Larceny?

You may have noticed that one way to commit burglary is to enter a structure with the intent to commit larceny.

Generally speaking, Larceny in California is committed when you move and take possession of the personal property of another with the intent to deprive them of the property. Burglary is different from larceny in three important ways:

Can I be Convicted of Burglary if I Didn't Steal Anything?

Yes! You can be convicted of burglary without taking anything. Even if all you did was crack open a window and reach into a house before you were caught. Even if you changed your mind and didn't touch anything else. The crime was committed when you opened the window and put your arm inside.

If you are charged with a burglary you are facing serious jail time or up to 6 years in prison. That is not a fight you want to go into alone. If you have been accused of burglary, reach out to an experienced burglary attorney serving Los Angeles.

The attorneys at the Law Offices of William Kroger are here to help with your California burglary charge so you can get back on track with your life. With our experience defending burglary and other serious charges, you may be able to avoid jail time and put this incident behind you for good. Call us today for a free consultation at 323-655-5700.